ERG is Italy's leading independent energy and petroleum group. It strategically invests in the latest environmentally-friendly technologies, revitalizes industrial sites with the construction and proper management of new facilities, and implements the highest health and safety standards. By adopting the PERMEATOR technology, ERG has again demonstrated its commitment to customers and the environment. The PERMEATOR will reduce emissions from the underground storage tanks at ERG's fueling sites, contributing to the health and well-being of its customers/employees and preserving its petroleum investment. 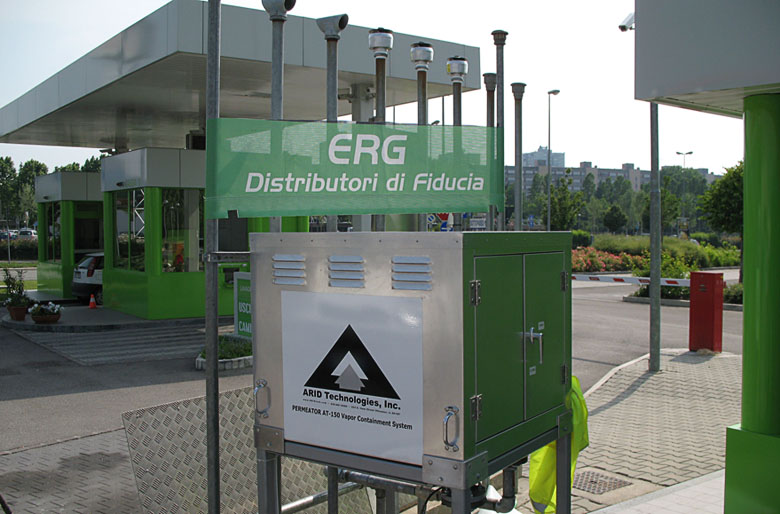 The PERMEATOR
The ingestion of excess air occurs during normal operation of Stage II vacuum-assist vapor recovery systems, resulting in hydrocarbon emissions. These emissions represent a potential health and safety hazard for the public as well as an economic burden to petroleum marketers who are unable to sell the same volume of product as originally purchased. ''ARID's PERMEATOR system provides the solution to both of these issues,'' states Ted Tiberi, President of ARID Technologies, Inc. ''Although Stage II vapor recovery systems are effective in capturing vapors displaced from automobile storage tanks during vehicle refueling operations, the excess air can cause significant evaporative emissions of product,'' said Tiberi

Anthony Mannara, Global Business Development Director for ARID, added, ''It is encouraging to see the leaders in the energy and petroleum industry invest in technological advances that protect the environment. Italy has the largest number of gasoline stations in Europe, and ERG's PERMEATOR installation addresses the issues of Volatile Organic Compound emissions and evaporative losses, providing a win-win solution for the public and the station owners.''

The PERMEATOR's patented hydrocarbon-selective membrane prevents the venting of gasoline vapors, known as Volatile Organic Compounds (VOCs), as well as the associated product loss from gasoline storage tanks. The system virtually eliminates evaporative emissions and has been proven since 1989, in large tank storage and refinery applications. A recent third-party study, conducted in Florida, concluded that evaporative losses can be as high as 0.35% of throughput (3.5 gallons per 1,000 gallons pumped). This same study calculated the PERMEATOR's recovery efficiency as 99.27%.